NetworkMiner is a Network forensic analysis tool (NFAT) for Windows operating systems. NetworkMiner can be used as a passive network sniffer/packet capturing tool in order to detect operating systems, sessions, hostnames, open ports etc. NetworkMiner’s primary purpose is collection of data regarding network hosts, rather than data regarding network traffic. In addition to direct file capture, NetworkMiner can also parse PCAP files for off-line analysis and to regenerate/reassemble transmitted files and certificates from PCAP files. This function can be used for extraction and archiving of media files transferred through the network. Supported file extraction protocols are FTP, SMB and HTTP. Extracted user credentials (username and password) for supported protocols can be found in the Credentials tab. Other useful features include keyword search in the captured/archived data and Nmap MAC vendor lookup.

Xplico is an open-source NFAT. The goal of Xplico is the extraction of application data contained in a capture sample of Internet traffic. For example, Xplico can export all e-mails (POP, IMAP and SMTP), HTTP contents, VoIP calls, FTP and TFTP files, etc.

Nload is a console application which monitors network traffic and bandwidth usage in real time. The gathered statistics are displayed in two separate graphs (one for uplink and one for downlink). Nload also provides detailed information about the total amount of transferred data and average, minimum and maximum transfer rate. We used this application in its simplest mode – Nload interface. There are, however, many different display options and additional configuration options you can read about in the application’s man page – $ man nload.

Moloch offers many distinct usage possibilities, the set of which is not limited to the ones mentioned down below and can be expanded by individual users, provided they can find other applications of this service: 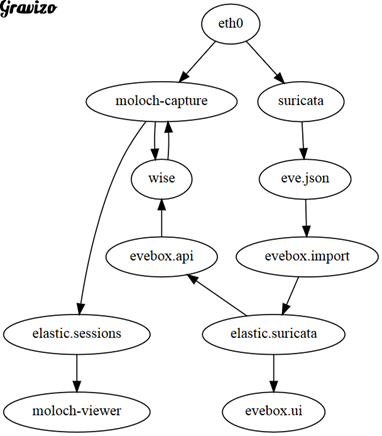 Elasticsearch is an open source tool, with its primary purpose being the fast and effective fulltext browsing of its indexed data. It is mostly used to browse document databases.

Considering the possibility of packet loss at high traffic flows, it is recommended for the packet capture interface to NOT be the same as the interface connected to the internet, in this case, the interface assigned with static IP address. On the server in our lab there are two interfaces, one for packet capture and one for “outside” communication. To prevent packet loss, it is recommended to increase the Moloch-side interface’s buffer to maximum and turn off most of the NIC’s services by using the following commands:

You can find out the maximum buffer size using the ethool -g command, to check NIC’s services use the ethtool -k command. Disable most of NIC’s services, since you want to capture network traffic instead of what the OS can see, they are not going to be used anyway.

The architecture of Moloch enables it to be distributed on multiple devices. For small networks, demonstrations or home deployment, it is possible to host all the tools necessary on a single device; however, for capturing large volumes of data at high transfer rates, it is recommended not to run Capture and Elasticsearch on the same machine. Moloch allows for software demo version testing directly on the website. In case of storage space shortage, Moloch replaces the oldest data with the new. Moloch can also perform replications, effectively doubling storage space usage. We advise to thoroughly think through the use of this feature.

Elasticsearch and amount of nodes

Amount of nodes(servers) to be used depends on:

Installation of Moloch is no trivial matter, that is why we have prepared this guide on how to set up the system in cloud environment. The server obtains an IP address dynamically through DHCP, therefore no editing of the interface configuration file is required.