This article explain how to make a JunOS router running inside of a qemu virtual machine in the win 7 64bit environment. The Junos qemu machine is planned to be used inside of GNS3. The tutorial is based on different sources which I have to go through, for example:

Inside each of them I found parts which does not work straightforwardly for different reasons (which experienced user should solve, but i'm a qemu, bsd and junos newbie).

Making a copy of a clear Qemu image with freeBSD

At the beginning we make a copy of our running and clean qemu image with installed FreeBSD inside of it (tutorial here). Therefore go to the folder where your qemu is installed and where the clear source image is also located. Then simply make a copy (and paste) of original qemu image, next rename it, here for example olive-base.img.

To follow this step we need running qemu image with installed FreeBSD, tutorial is here.

Now we will install JunOS (10R) on our olive img. So start your fresh, just installed Qemu FreeBSD machine:

the command tells Qemu to start Qemu disk with single network e1000 interface (with mentioned MAC address). The Qemu should start and load installed FreeBSD, where we have to be able login as root using our root password: 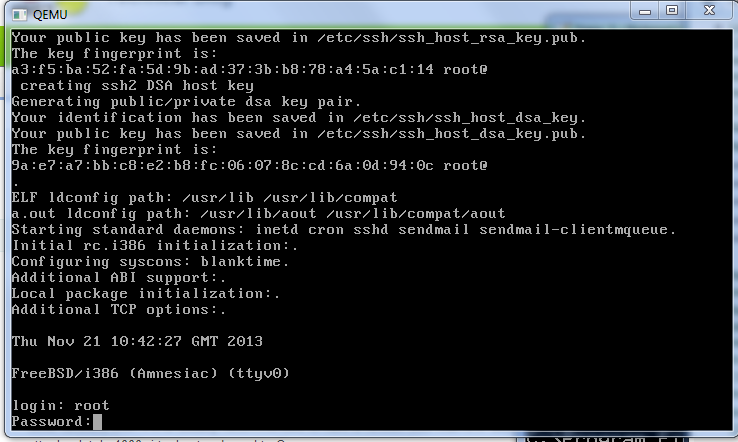 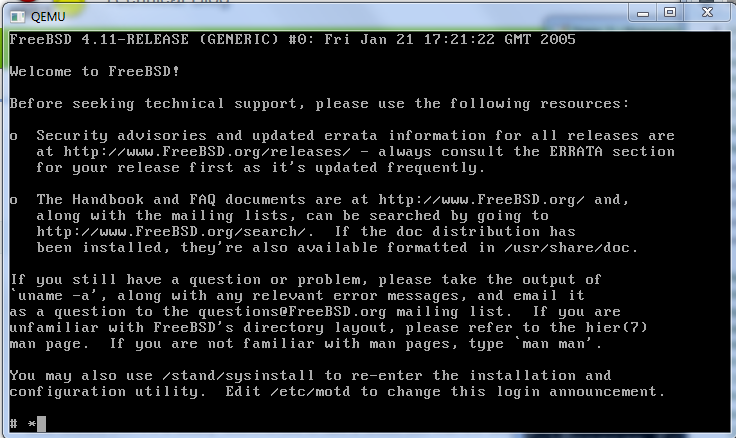 Now we have to obtain an IP address typing:

We verify it with 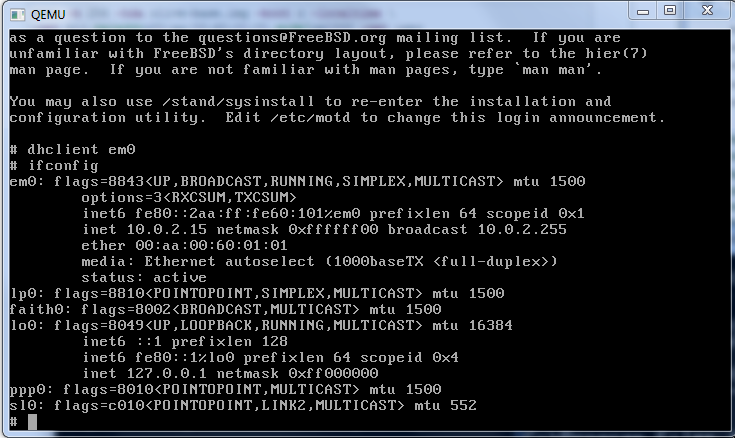 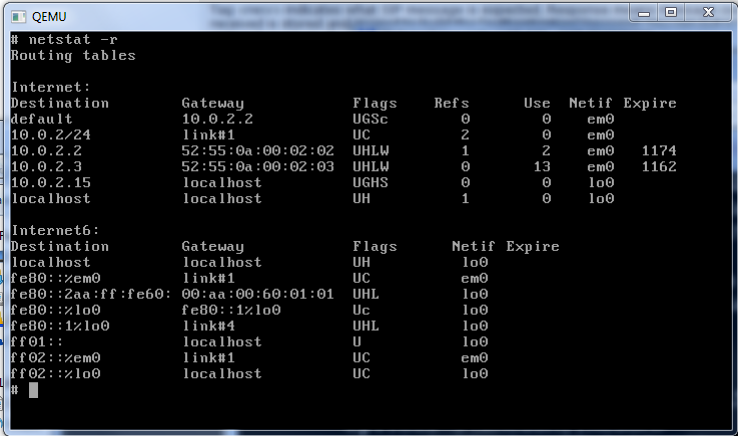 Quite strange but there is a NAT connection between the guest and host system and we should be able to ping or transfer file without any difficulties. Try 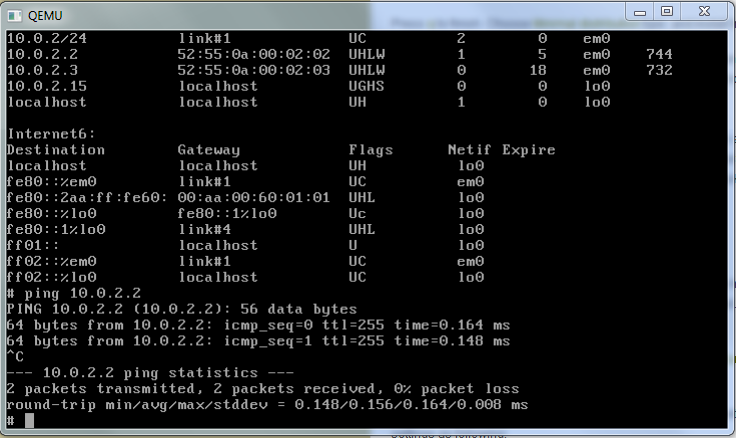 Now we have to start our windows sFTP server, in a case of FreeSSHd, it have to be installed, runnig and at least one user have to have account created, SFTP have to point out to the directory, where Junos file is stored:

We shoud check if our windows sftp service (freeSSHd) is running: 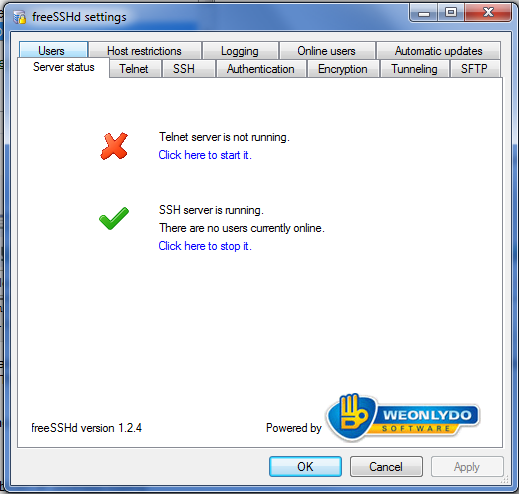 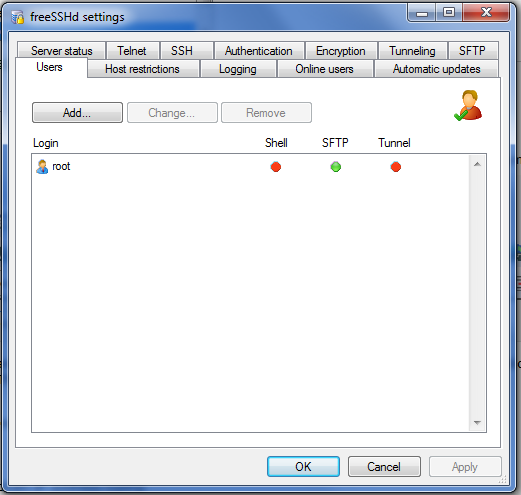 and the home folder with junos tgz package is setting up 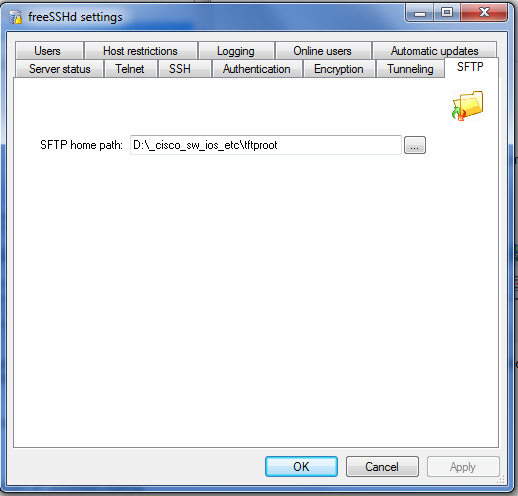 then we should be able log in from the qemu freebsd to our SFTP server inside of windows using sftp command: 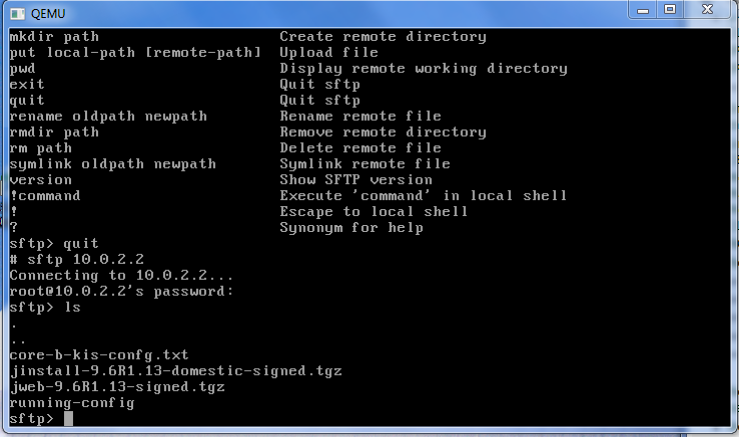 inside of the freeSSHd we may see, that we are sucesfully loged in: 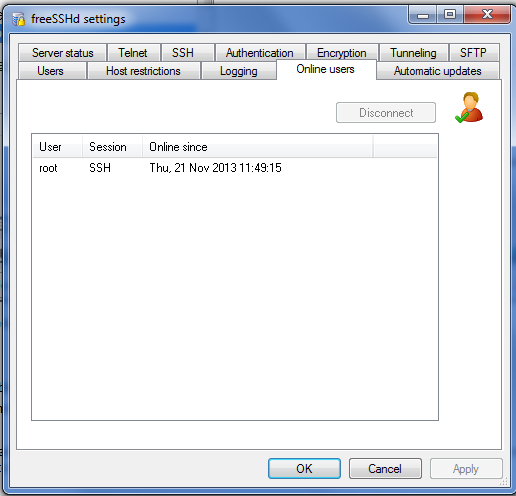 then we may download requested Junos file (in my case jinstall-9.6R1.13-domestic-signed.tgz) 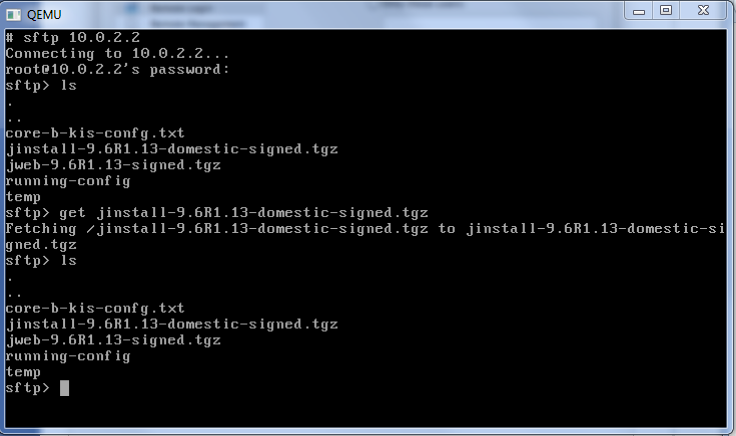 The jinstall file after 7.4 version has a binary called checkpic. This binary will fail and the image cannot be installed. Replacing this binary with /usr/bin/true fixes the issue. Also, it is needed to recalculate MD5 and SHA1 checksums before archiving them back.

Here I'm providing fixed steps because one of best guides (Olive reloaded or how to emulate Juniper routers) has this part misleading and with erros (openssh instead of openssl, bad file names and paths ..)

then open the jinstall-9.6R1.13-domestic.tgz.sha1 file and delete from the first line name of the file, just keep the sha1 hash

exit vi and tar all files and keys into a new package, named olive

next delete everything unusable, because seems that 4G bytes Qemu HDD is for Junos 10 so small

then we may install modified olive package

The package installation takes a few minutes, and after sucess, we have to reboot the qemu machine with "halt" BSD command. After our machine was shut down, close the qemu window (or pres Ctrl Alt 2).

Now we have to complete main junos installation process. This require booting the junos router  image. Be able to start and observe the installation process we redirect output to the telnet server, port 3001, and also we initiate the image booting just after telnet login: and as the next step (required to start installation) we have to use putty\kitty\telnet to make a telnet session on localhost, port 3001

Using telnet we are able observe the output from boot and install process.  During the junos installation process qemu machine may reboot many, we have to patiently (looks there is no activity, but be patient, we may observe that image size is growing) wait for the end (from couple of minutes to tens of minutes, depends on the amount of emulated RAM and HW performance).

Finally, we get the login prompt (hura) and after login as root we should run

which provide us with Junos prompt 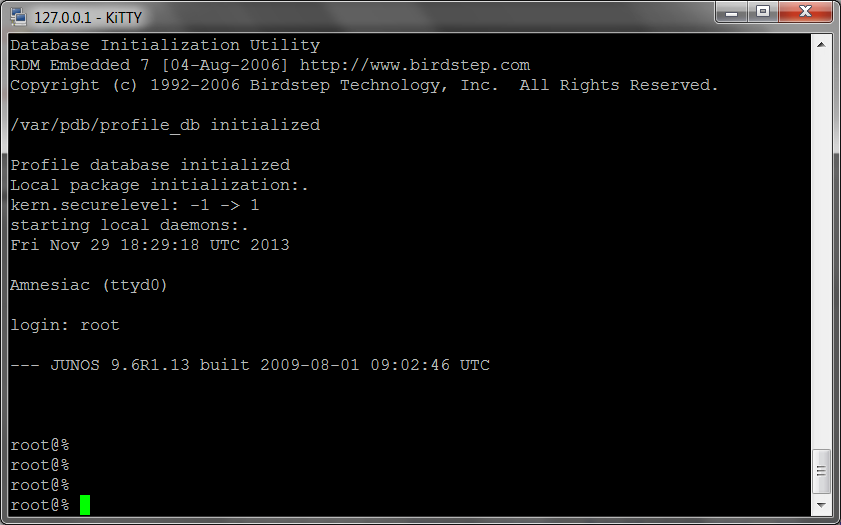 For first time I have used Qemu 0.13. Till to reboot just after junos package installation evrything is going well. After reboot following error appear  (dog error – reset of uninitialized watchdog): 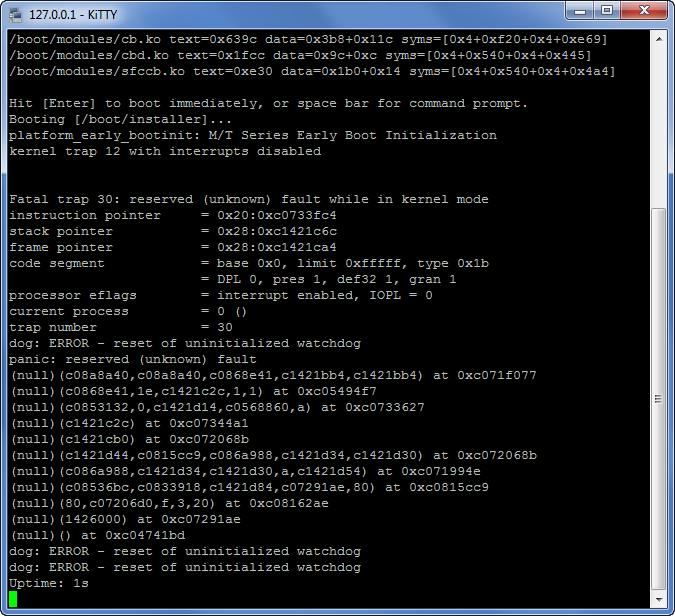 Surfing web I found (here and here) that :

Qemu version above 12.0 contains a bug in bios which causes some troubles during the boot of Junos image.You need to add your own modified version of bios.bin with the CONFIG_SMBIOS parameter to 0.

You may download a already compiled version of this bios.

You can also just download a compiled bios.bin from this site : http://brezular.wordpress.com/2012/02/12/installation-solaris-sparc-2-6-sunos-5-6-on-qemu-part-1-qemu-installation/

Alternatively you can compile your own modified version of the SeaBIOS.