Here I’m describing the problem where my Linux MInt 17.3 Rosa has a problem to access a share provided through FreeNAS CIFS (version 9.10 STABLE). Windows machines have been able to access, but from the linux I had received rrror msessages.

Actually I’m not focusing on tasks regarding of how to create a dataset, CIFS sharing neither how to setup permissions. There are a lot of guides how to do that, but of course as the part of troubleshotooting proces you should check it too. The problem is that my sharing is accessible from Windows 10/8.1, but once I want to create a share from linux a have a problem 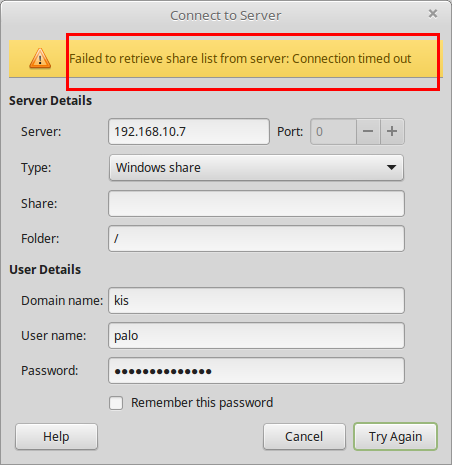 and mounting still does not work.

The problem is the version of SMB protocol used for providing the CIFS service. Configuring CIFS sharing (Service -> CIFS  Settings) the Freenas want to setup a lot of CIFS parameters, among them there is a Server minimum and maximum protocol,

where the help is telling us that this is “The minimum (,resp. maximum) protocol version that will be supported by the server“. Default values for minimu is SMB2 and maximum is SMB3. The next table is telling us that:

changing the minimum version to LANMAN1 allows to make a share (for me works LANMAN1/LANMAN2,NT1)